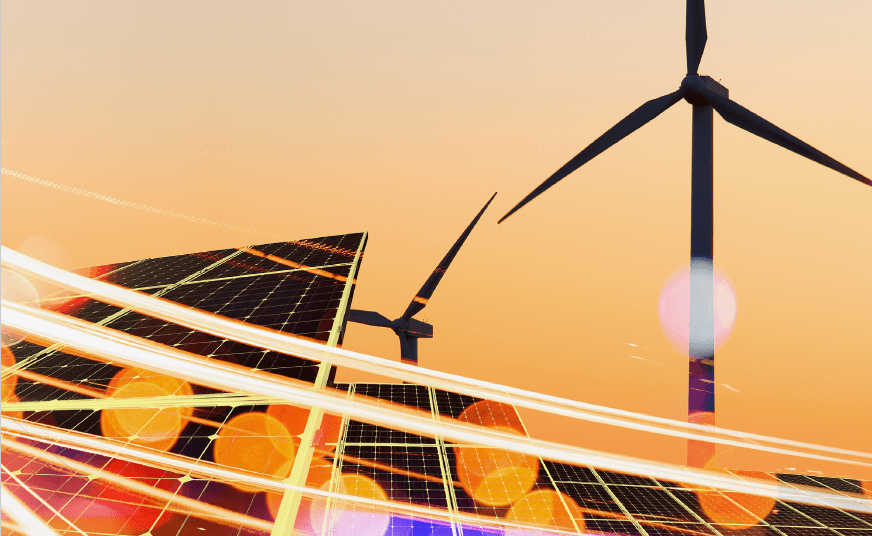 THE ADVANTAGES OF BROMINE-BASED FLOW-BATTERY TECHNOLOGIES

Today, in 2017, about 7.5 billion people live on our earth. The world population increases each day. By 2050, things are about to get really cosy. It is expected that then, 9.7 billion people will populate our planet. To provide maintenance for this inhabitation, energy is needed. A lot of energy. But what is the best way to generate power to the benefit of our environment? And can we store this precious energy in an efficient manner?

The power generation sector is undergoing a major transformation, diversifying its energy mix. Today, a lot of the energy is generated by fossil-energy-based centralized power systems. 40% of the world’s electricity is still generated by coal-fired plants. However, thanks to bromine, this source of energy can be made cleaner and safer.

But the real future focus in power generation is on low-carbon, renewable-energy-based systems. The 2015 Paris Climate Agreement aims to avoid global temperature increases, by making a shift towards these climate friendly systems.

As the supply of renewable energy grows, energy storage (the capture of energy produced at a point in time, for use at a later time) becomes more important. Today, only 4% of the power generation globally comes from wind and solar energy. This share may grow to 20% or possibly even 40% by 2060, because of ingenious energy storage systems.

Renewable energy has a variable production nature and cannot always be consumed at the time it is produced. Wind power is uncertain, and solar power is only available during daylight hours, while demand often peaks after sunset. On top of that, the current grid capacity is not able to cope with the growing volumes of renewable power and the increasing demand for it. The lack of continuity in the supply makes the energy hard to retain, which is a missed opportunity. In 2014 alone, enough energy to power 375.000 homes for a year was produced but not used. Therefore, the incapacity of the grid system to utilize all the newly generated power is a big deficiency for our climate friendly future.

That is why storage systems are not only an energy-, but also a lifesaver. Storage systems supply more flexibility and balancing to the grid, providing back-up to the intermittent renewable energy. The energy can then be used without the demand for a continuous connection to the grid. Expanding the energy storage capacity helps to fully exploit the growing options of renewable energy. This method of improving efficiency improving and reducing costs, gives customers the freedom to manage their own power needs.

How bromine is used for the increased demand in energy storage

Currently, there is a limited storage of electricity relative to the increasing demand. Pumped hydro storage (PHS) is a globally used storage solution. At times of low electrical demand, water is pumped from a lower source into a higher reservoir. Once the demand grows, water is released back into a lower reservoir, generating energy. Further growth of PHS is unfortunately not sufficient to fulfil the projected requirements. Bromine-based technologies are one potential solution to meet these growing needs.

Bromine-based technologies are a highly efficient and cost-effective electro-chemical energy storage solution. It makes energy from renewable sources successfully manageable. The technology minimizes energy loss, reduces energy use and costs and secures supply. That is why it is the perfect mechanism for grid, facility or back-up/stand-by storage.

The advantages of bromine-based storage technologies

The battery systems release energy continuously at a high rate of discharge for up to 10 hours or more. The high energy density increases the storage capacity of each battery. They have no self-discharge, as there is no reaction outside of the reaction chamber. Because the chemical reaction in flow batteries is reversible, they can be recharged easily and quickly without replacing the electro-active material. On top of that, the batteries can be recharged over 10.000 times. The option to decouple power and energy offers the desired flexibility. 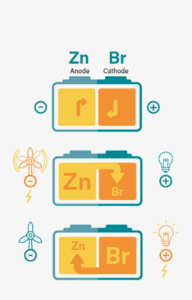 Bromine flow batteries operate by passing a solution over a membrane, where ions are exchanged to charge and discharge the cell. They typically include zinc-bromine (Zn-Br) or more recently hydrogen bromide (HBr).

The zinc-bromine flow battery is a hybrid flow battery fuelled by the reaction between two chemicals dissolved in liquids, namely zinc and bromide. The rechargeable fuel cell exists of two compartments (one for the positive electrode reactions, one for the negative) separated by a micro-porous polyolefin membrane. The battery reversibly converts chemical energy directly into electricity. Aqueous zinc bromide flows through it, generating a charge by moving electrons back and forth, thus generating energy. During discharge, Zn and Br combine into zinc bromide, generating 1.8 volt across each cell. When electricity is stored, the battery is charging, and metallic zinc is externally deposited as a thin film on one side of the carbon–plastic composite electrode.

The net efficiency of this battery is about 75%. Zn-Br batteries offer the high cell voltages of flow batteries, while releasing two electrons per atom of Zinc. This gives them the highest energy density among currently available flow batteries.

Large sites around the world are using bromine flow batteries to balance their energy deficiencies, because of their extended duration, reliability and low cost. At the Marine Corps Air station in Miramar (California), energy security is now guaranteed, energy efficiency has been promoted and the reliance on fossil fuels is reduced. It was the US Department of Defence that chose to use bromine-based storage technologies for this military microgrid.

Another example in Europe of the innovative battery technology is the Photons Farmer, a solar energy-storing farm in the Netherlands

At BSEF, we are excited to see climate friendly systems and clever storage solutions grow. Read more about our vision on energy, and the role of bromine in energy storage.

What are your experiences, expectations or opinions about renewable energy and energy storage?

Do not hesitate to share this article, to give your opinion and to start the conversation.