HOW BROMINE CAN ADDRESS A MAJOR PUBLIC HEALTH CONCERN

Energy is an important need in human life. We just cannot live without it. Because of the growing world population, the global energy demand is increasing as well. There are various sources to generate this power. Low-carbon, renewable-energy-based systems with accompanying energy storage solutions are beginning to make their mark. But did you know that today, 40% of the world’s electricity is still generated by coal-fired power plants? This method for power generation can have severe effects on our environment, and human health. Fortunately however, adding brominated salts to the coal or flue gas stream can alleviate some of the problems.

The coal that is burned in power plants can contain several impurities, e.g., mercury at varying concentrations. When coal is combusted, this mercury can be converted to highly volatile mercury and mercury compounds that are released into the atmosphere. Although mercury is only found in coal in small amounts, coal is burned in such large quantities all over the world, that these small amounts quickly add up. Globally, coal power plants emit 500 tons of mercury a year (United Nations Environment Program). This eventually ends up in the environment. Mercury is also a major public health concern, especially for children and pregnant women. In large doses, mercury contamination can affect the health and populations of fish and wildlife, as it harms their central nervous and reproductive systems. People who eat fish containing mercury, especially children, can suffer from a myriad of developmental problems. Clearly, a solution for these dangerous emissions is needed. 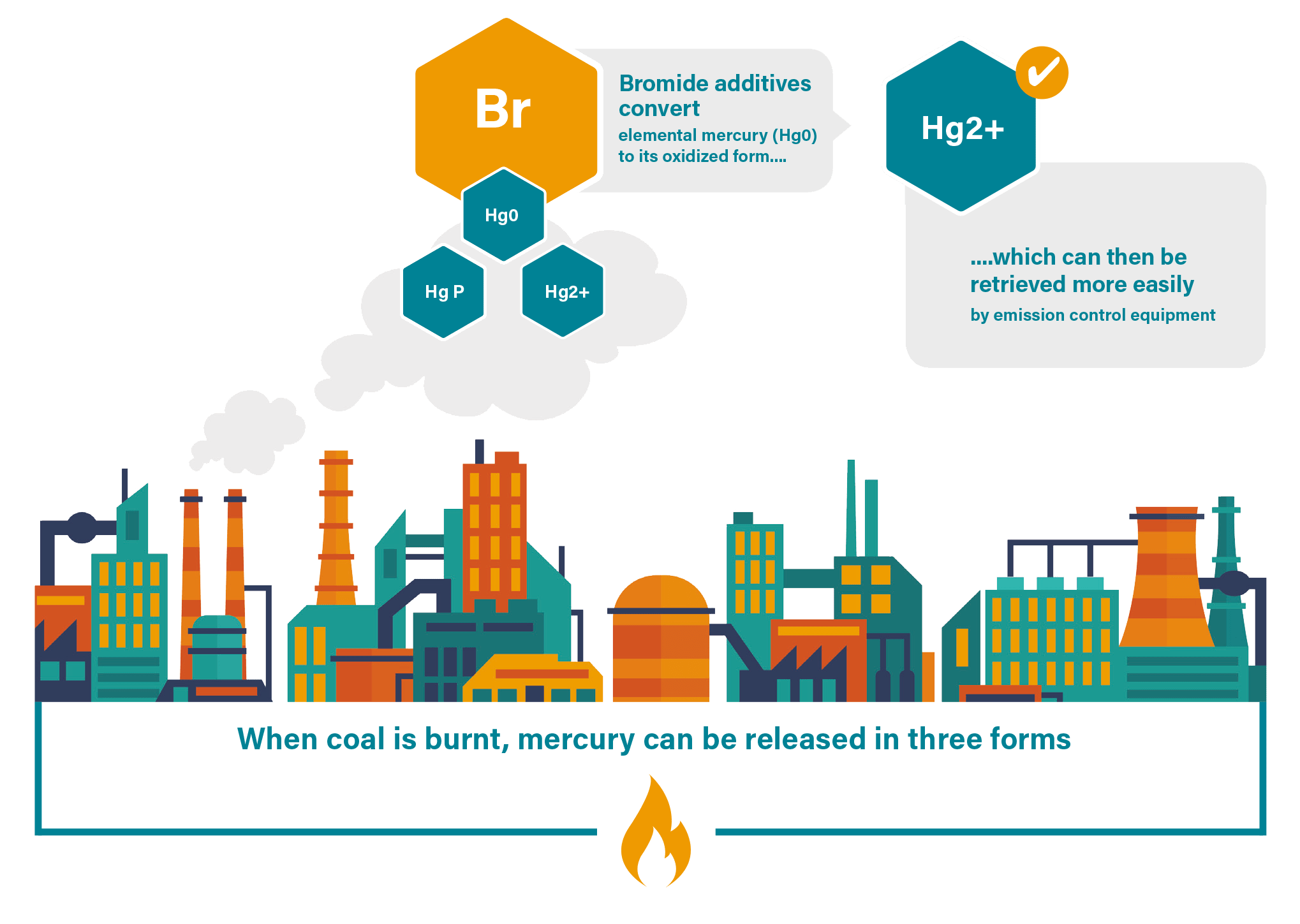 Here is where bromine comes to the rescue. Bromine-based compounds are versatile and may be added at different stages of the combustion process. Bromine additives then convert elemental mercury into its oxidized form, which can be captured more easily by emission control equipment.

Once captured, the oxidized mercury is carefully handled. The method depends on the abatement technology used as well as on the type of installation. Mercury emissions are reduced up to 90% using this cost-effective method. That is why BSEF promotes this benefit as one of the key bromine applications for our society and economy.

A promising future for bromine applications in mercury emission reduction

With the growing awareness of mercury pollution and technical solutions available limits on mercury emission from coal power plant are getting stricter. The US has, with its maximum of 1.5 micrograms of mercury per cubic meter, the strictest emission limits worldwide to date.

Today, mercury emission reduction accounts for only 2% off all bromine use worldwide. But now that other countries are beginning to follow the US example, bromine emission reduction applications are rising significantly. All eyes are especially on China, as it burns five times more coal than the U.S. In addition, the EU has in August 2017 introduced strict limits on mercury from coal and lignite arising from its review of the Large Combustion Plant Directive.

The Minamata Convention, protecting health and environment from mercury

Coal combustion is responsible for a quarter of mercury releases to the atmosphere, while the clinker cement, ferrous and non-ferrous industry sectors account for another quarter. BSEF believes that it is important to address of all of these sources and to actively search for solutions to the mercury reduction challenges. That’s why we support the Minamata Convention on Mercury, and why we will be present at the inaugural Conference of the Parties (COP 1) of the Convention in Geneva in late September.

Do you want to know more about the Minamata Convention on Mercury, and the global acknowledgement of the adverse environmental and health impacts of mercury? Read our article about this global treaty.

Are you attending the Convention as well? Feel free to contact us, and hopefully we can meet and share our insights on mercury pollution, and on the use of bromine for mercury emission reduction.

What do you think about the usage of bromine compounds as mercury emission reducers?

Do not hesitate to share this article, to give your opinion and to start the conversation. Because the broader this environmental issue is addressed and talked about, the bigger the awareness on mercury pollution.

And at BSEF, we think awareness is the first step towards change.